Health Is Not A Goal 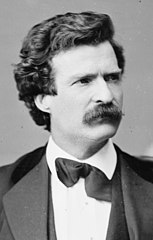 Regular readers will know these words from Mark Twain by heart: even so, they bear repeating:

There are people who strictly deprive themselves of each and every eatable, drinkable and smokable which has in any way acquired a shady reputation. They pay this price for health. And health is all they get for it. How strange it is. It is like paying out your whole fortune for a cow that has gone dry.

Like an obedient little citizen you have eschewed (not chewed) donuts, you never drink soda pop in measures greater than 15.9 ounces, and have you assiduously avoided even secondhand smoke. Congratulations. You almost certainly have clearer arteries, a less peccant pancreas, and pinker lungs than your disobedient neighbor who indulges. You are healthier than he.

What will you do with your extra store of health? How will you spend it? What are you saving it for? Or aren’t you being rather self-indulgent by avoiding “every eatable, drinkable and smokable which has in any way acquired a shady reputation”?

That was the argument Socrates gave in the Phaedo (quotes either from Tredennick translation [T]; or Jowett [J]). He said the temperate are “temperate because they are intemperate [J]”. And “What about temperate people? Is it not…a sort of self-indulgence that makes them self-controlled? [T]” The temperate, or self-controlled

are afraid of losing other pleasures which they desire, so they refrain from one kind because they cannot resist the other. Although they define self-indulgence as the condition of being ruled by pleasure, it is really because they cannot resist some pleasures that they succeed in resisting others; which amounts to what I said just now—that they control themselves, in a sense, by self-indulgence. [T]

Jowett’s translation of the same passage is also helpful:

For there are pleasures which they are afraid of losing; and in their desire to keep them, they abstain from some pleasures, because they are overcome by others; and although to be conquered by pleasure is called by men intemperance, to them the conquest of pleasure consists in being conquered by pleasure. And that is what I mean by saying that, in a sense, they are made temperate through intemperance.

Now unless your desire is to pose for a health magazine, or to make a tour showing off your healthiness, or to bore your workmates with tales of your pulse rate and cholesterol number, health is not a goal. You cannot bask in health: your body is either in optimal working order directed towards some behavior, or it is in less than perfect condition. But either way, your body is meant to do something, even if the something is as simple as sitting quietly and thinking.

This is what the food police (coincidentally, a new book with same name) and folks like Nanny Bloomberg cannot understand. They have failed to recognize that not everybody is directed towards the same activities as they, or that not all want to spend their health in the same fashion.

As Socrates showed us, your temperance for smoking must be because you are saving your lungs for some other self-indulgent activity. Maybe it’s in making a spectacle of yourself wearing ugly shorts and garish tennis shoes as you “jog” down a path. Or perhaps it’s because you want to join a bubble-blowing contest. Whatever. And your avoidance of trans-fats is only because you choose to be intemperate in some other aspect. Maybe it’s fitting into a pair of skinny-legged hipster jeans. Who knows.

But these are differences in choice, and that’s all. You cannot convince a man not to smoke or to eat excessively just because it is “healthy”, for that is like trying to sell him a dry cow. If you want him to change his behavior, you must convince him that the behaviors he is forgoing outweigh those which he has embraced.